"The Champagne of Big Band Singers" 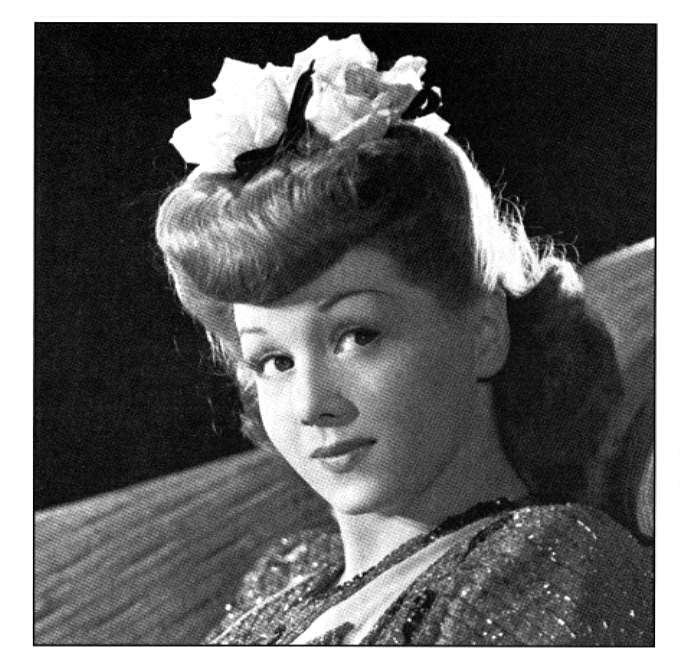 Click here for a link to Ron Knoth's
"Aisle of View: Perspectives on Popular Culture: It's a Sin To Tell a Lie"

During the golden age of the big bands, there were many female vocalists who became a defining element, and sometimes the star attraction, of the ensembles they worked with. Noteworthy examples include Bea Wain with Larry Clinton, Ella Fitzgerald with Chick Webb, and Doris Day with Les Brnwn. There was no other swing era association, however, that quite paralleled the unique partnership between Dolly Dawn and George Hall's Hotel Taft Orchestra. The diminutive and ebullient Miss Dawn evolved into the focal point of the band so promptly and decisively that Hall eventually decided it would be in everyone's best interests to hand her the reins of leadership! It was a remarkable turn of events, even though this new arrangement only lasted several months before Dolly decided to try and make her way as a solo artist. Nevertheless, the many splendid sides attributed to "Dolly Dawn & Her Dawn Patrol" rank high among the best-loved recordings of the era. Dolly proved to have an equally deft touch with both rhythm tunes and ballads and some of her finest moments have been collected for you here.

Our story begins with the early bandleading efforts of George Hall, who in the late '20s settled down for an extended stay at the Arcadia Ballroom in New York. Billed as George Hall's Arcadians, the band made its first recordings in 1927. They were largely uninspiring efforts devoid of any personality, due largely to the tact that Halt relied on stock arrangements and used prolific studio singers such as Scrappy Lambert and Irving Kaufman for the vocals. The band's lack of charisma was in many ways a direct reflection at Hall, who Metronome writer George Simon once characterized as, "an affable man who looked more like the chief buyer in a men’s clothing store than a bandleader.“ Hall was in fact a musician, and his chosen Instrument was the violin. Regrettably, rather than complementing his band's efforts, Hall’s fiddle playing often seemed intrusive, as though it were cutting against the grain of the overall presentation. He did manage to craft a “businessman's bounce“ sort of sound that many dancers found appealing, however, which made his group an ideal candidate for the hotel circuit.

The Hall band found its most enduring residency at New York's Hotel Taft. Using the tag line “Dance With Romance,“ they settled into the hotel's Grill Room in 1933 and remained a fixture there far several years. By this time Hall had recruited a few capable vocalists, including Johnny McKeever and Sonny Schuylur. His first major female singing star was an excellent vocalist named Loretta Lee, who joined the band in 1933 at the beginning of both its Hotel Taft engagement and a new recording contract with RCA's Bluebird subsidiary label. When Lee left the Hall band in 1935, she was replaced by a cherubic 16 year old who was born Theresa Maria Stabile in Newark, New Jersey on February 3, 1919. Armed with the more euphonious stage appellation of Dolly Dawn, she joined Hall in July of 1935 and struck a chord with the public almost immediately. By the following year she'd already been featured In a Vitaphone short subject with the band, and her vocals were boosting Hall's Bluebird recordings to new levels of popularity.

The main factor in transforming Hall and Dolly Dawn into national favorites was the phenomenal radio exposure afforded them by the Hotel Taft. For six days a week they broadcast a 30-minute program over the CBS radio network from noon to 12:30. It was not only an ideal platform from which to promote their recordings, but also an irresistible magnet for writers and song publishers seeking a high profile plug, giving them the first crack at a wide variety at material. The only trace at an Achilles' heel was Hall's failure to find an arranger to pen instrumental charts of a quality that would give the band a truly distinctive, individual sound. He employed some respected talent, including George Paxton, who played sax far Hall and later formed a band of his own, but never quite found someone with the magic touch. Instead, the burden of helping the Hall band stand out from the pack fell increasingly on the diminutive shoulders of Miss Dawn. Dolly proved equal to the task, and she deserves a great deal more credit for her talent than she is usually given in latter-day histories of the period.

Dolly Dawn was simply masterful when it came to selling a song. If the tune in question was an up-tempo novelty like “Okolehao“ or “0oooo-Oh Boom!,“ her infectious sense of swing and a strategically employed trill in her voice gave the material a tremendous boost. She was unusually adept at toying with tempos, sometImes sneaking up on the notes after lagging behind the beat, and occasionally punching up a lyric with a vocal wail that was somewhat reminiscent of Al Jolson. On ballads like “(Have You Forgotten) The You and Me That Used to Be“ and “How Did He Look?“, Dolly conveyed a knowing sense of sophistication was quite remarkable for her tender years. No less an authority on popular singing than Ella Fitzgereld has expressed admiration for Dolly's work once recalling that she used to skip school to hear Dawn sing. Her reputation in critical circles would no doubt be much higher today if Dolly had been featured with a celebrated swing ensemble Instead of a “hotel band,“ and made records more along the lines of those that Mildred Bailey turned out with Red Norvo. Although they collaborated on many wonderful recordings, Dolly sometimes found herself swimming against the tide of the Hall band’s staid approach.

A perfect example is their 1937 recording of “Bei Mir Bist Du Shon” Dolly's vocal is all that could be hoped for, but the instrumental arrangement sounds so stiff and clipped that it does little to flatter her efforts. This situation improved somewhat when Hall began featuring Dolly with the looser small group backing of several musicians culled from the main band, which is where the billing “Dolly Dawn & her Dawn Patrol Boys“ originated. It should be noted, however, that Hall noticeably improved the sound of his band as the years went by. By late 1939, shortly before he left the Taft Hotel, Hall had cut back considerably on his fiddling and hired some impressive new musicians, including a rhythm section featuring Tony Mottola on guitar, Nick Fatool on drums, Johnny Guarnieri on piano, and Doc Goldberg on bass. In a recent interview, guitarist Mottola recalled that his first recorded solo with the Hall band took place on their 1939 rendition of “Shine.“ By 1937 the band had switched its recording affiliation from Bluebird to Vocalion, the label on which they found their greatest commercial success.

TheIr all-time biggest hit arrived early in 1938 with a jaunty Interpretation of “You're a Sweetheart,“ the title song from a 1931 Universal musical starring George Murphy and Alice Faye. The tune fit Dolly like a glove, rapidly became a signature song for her, and in a few weeks the single release was the most popular record in the nation. Follow-up hits like “Who Blew Out the Flame?“ and “Goody Goodbye” were that era’s equivalent of top ten records. Dolly's appeal as a featured performer was growing at the same time that Hall’s interest In fronting the band was waning, twin developments that were soon to lead to an unusual changing of the guard. Hall had a nose for publicity as witnessed by the widely circulated but false story that he had at one point “adopted” Dolly (she already had parents of her own!). He capitalized on his decision to step back from the limelight and simply manage the band by hosting an elaborate ceremony at New York's Roseland Ballroom an July 4, 1941. At this event, which was attended by fellow bandleaders Vincent Lopez and Johnny Long among many other celebrated personalities, Hall publicly turned over the band’s leadership to Dolly. Dolly Dawn & Her Dawn Patrol kept flying until March of 1942 when they were grounded by the new realities of a country at war. With America's entry into World War II, many of the best musicians were suddenly drafted. It made increasingly little sense for Dolly to shoulder the numerous burdens of leading a band when the potential for lucrative nightclub work as a single loomed so beckoningly. Unfortunately, she never quite scaled the same heights as solo performer. The hits dried up after 1942, although she did score a modest comeback with her 1948 rendItion of “The Same Old Cry“ for Regent. Nevertheless, Dolly has continued recording and performing, and as of this writing she remains a vibrant reminder of a marvelous era in popular music, In 1998 she was honored with induction into the Big Band Hall of Fame, a worthy tribute to a great lady who is definitely a sweetheart, if there ever was one, JOSEPH F. LAREDO, 2001

Dolly Dawn
from the liner notes of "SMOOTH AS SILK"

In the annals of the early years of that period in American popular music known as the Swing Era, it is well documented that the most valuable asset of GEORGE HALL AND HIS HOTEL TAFT ORCHESTRA in New York was its girl singer, DOLLY DAWN. Dolly (born Theresa Anna Maria Stabile in Newark, New Jersey) first sang with Hall's Orchestra on May 25,1935 while still in her early teens. Within a few short years, her popularity was so great (as a result of the daily C.B.S. radio broadcasts from the Grill Room of the Taft, best selling recordings, and nationwide tours) that George Hall turned his orchestra over to Dolly, and renamed it DOLLY DAWN AND HER DAWN PATROL BOYS. Prior to this Dolly was the only recording artist in pop music history to be signed to two recording contracts simultaneously with the same company, that of vocalist with George Hall and also with her own Dawn Patrol (another "first," one of those small bands-within-a-band). The success of DOLLY DAWN AND HER DAWN PATROL BOYS continued until the early years of World War II, when members of the band were drafted faster than they could be replaced and in 1942, the Dawn Patrol disbanded.
In those first seven years. Dolly Dawn established herself as a vocalist of charm and natural talent with an irresistibly endearing personality to match.. She delivered a ballad with a sweet tender passion beyond her years, and a rhythm tune with spontaneous bounce and teasing wit. While still in her teens, Dolly's style and phrasing were so individual, that no less an artist than Ella Fitzgerald credited her as a major influence on her development as a singer.
In fact, at the time when Swing was King, Dolly Dawn was a first rate singer with an arguably second-rate band while, more times than not, the undeniable first-rate bands had second-rate singers. This is possibly the reason that Dolly has occasionally not enjoyed the credit and appreciation due her as one of America's great female vocalists. - James Link (edited by Andrew M. Wentink), 1997 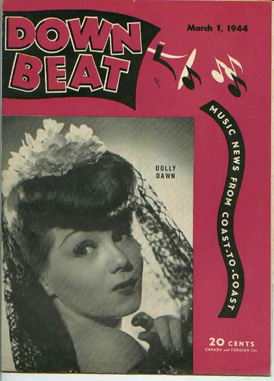 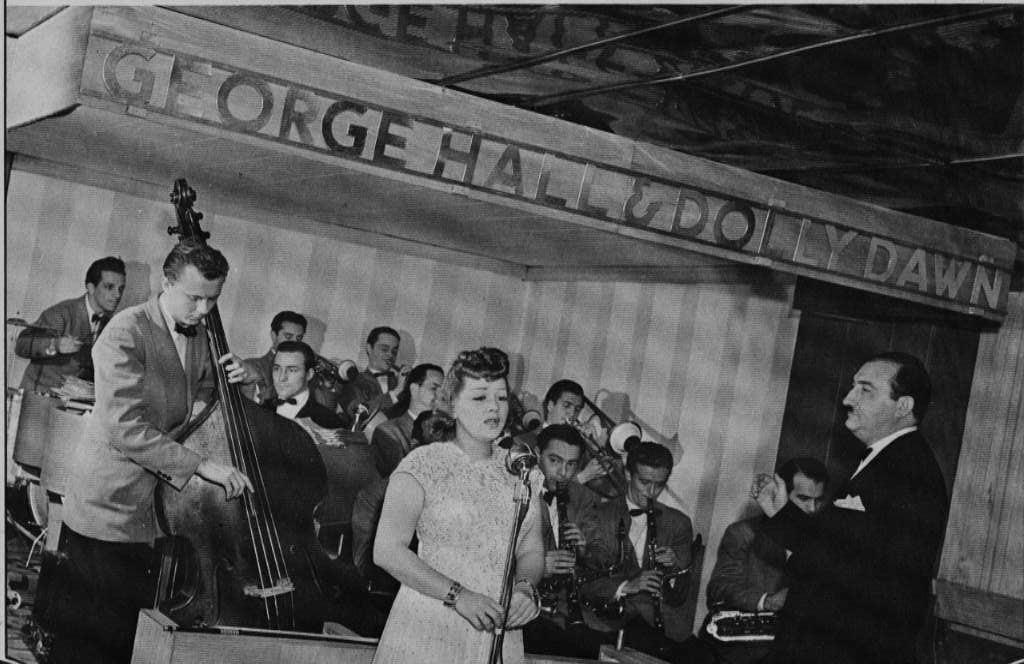